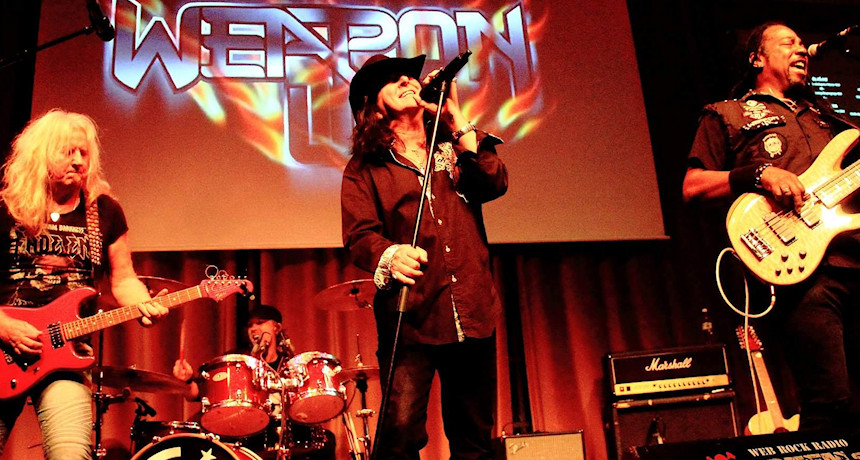 ‘Metallica opened its early live sets (and ‘Kill em all’ album) with ‘Hit the Lights’, a song that begins with a noisy two – chord flourish meant to evoke the opening of a concert. However, in a further illustration of NWOBHM’s important role in Metallica’s musical direction, the opening chords- drum fills and all seem to have been lifted directly from Weapon’s ‘Set the Stage alight’, the 1980 release from the influential fledgling NWOBHM band.
(C) Metallica Biography ‘Damage Incorporated’ Published 2006

Weapon were formed in March 1980 by Vocalist Danny Hynes & Guitarist Jeff Summers. After a couple of gigs they replaced the original rhythm section, bringing in a couple of their friends, bassist Baz Downes & drummer Bruce Bisland. A showcase for Laurie Dunn, then head of Virgin Publishing, resulted in the band being immediately signed to a worldwide deal with Virgin. After playing a gig at The Virgin owned ‘Venue’ in London, Motorhead guitarist Eddie Clarke (who happened to be in the audience) suggested to the band that Weapon should open for Motorhead on their forthcoming U.K. tour. A showcase gig was hastily arranged at The Music Machine, Camden for Motorhead and their management, after which Weapon were offered, and accepted, the tour!
The 32 date ‘Ace Up Your Sleeve’ UK tour began at The Gaumont, Ipswich, on October 22n, ending with four ‘Sell Out’ shows at London’s iconic Hammersmith Odeon on the 29th November 1980. 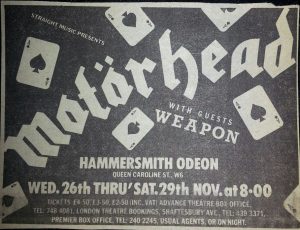 During the tour, on the 13th Nov’, Weapon released their first single, the double A sided Mad Mad World / Set The Stage Alight. The latter reaching number 2 in the Sounds heavy metal charts. They also recorded several tracks for an album to be called ‘Set The Stage Alight’ which didn’t actually see the light of day until 2003 when it was released on Zoom Club Records. The band toured for the next 18 months before management/contractual problems arose, forcing the band to split. The boys remained, and still are, the best of friends, so much so, that in Summer 2005, they re-grouped to celebrate what would have been their 25th anniversary.
After a couple of warm-up shows in London they headed of to Germany to play the Headbangers Open-Air Ball on Saturday 8th July, 2005. The boys then went their separate ways again, Danny returned to his band, Paddy Goes To Holyhead, Bruce to Andy Scott’s Sweet and Jeff to Statetrooper. Sadly, Baz, had to retire from live music due to illness.

Danny & Jeff would soon discuss the idea of getting the band back together and finish what they started all those years ago. Unfortunately, Bruce was unavailable due his commitments with Andy Scott’s Sweet and with the now retired Baz, a new rhythm section was needed. The new line-up debuted to a sold-out show at London’s premier rock venue, The Peel and were subsequently offered billing at the Hard Rock Hell Festival with Wasp and Queensryche.

Rave reviews and ecstatic audiences prompted the band to consider recording an album of new material.

The band goes into the Scream Studios, Croydon and decide they should release a single (the band’s first single in over 30 years!). A promo video was shot on the roof of The Harlequin Theatre in Redhill, Surrey and, the Jeff Summers penned ‘Ready 4 U’ , was digitally released worldwide on June 6th to rave reviews. The band were then offered a spot at the Aero Rock Starz Festival in Bulgaria on July 9th where they played a blinding set in the 40 degrees heat. They certainly ‘Set The Stage Alight’

Following dates across the UK & Europe it was back to Scream Studios, where work starts seriously on the new album. One memorable day being when Baz and Bruce came in to re-record ‘Killer Instinct’ an old 1980 demo written by Danny . The circle was complete. Danny and Jeff, the old and new rhythm sections, all together. There may have been a beer or two in the pub after that session!
With the album finally recorded, mixed and major interest from several management and record companies everything was set to go when the band are hit with a legal action over the rights to the band name. This, frustratingly, delayed everything for over a year. To cut a very, very long story short they failed to renew the name they’d registered since 1980. With the threat of a lawsuit, the band decided to add (UK) to their name.

The album ‘Rising From The Ashes is released to ‘critical acclaim’ at a sold out show at The Purple Turtle, London. Following UK dates in November 2014 Weapon parted company with their drummer. After a two month search the band announced his replacement, Australian powerhouse Darren Lee, who so impressed the band at his audition that he was immediately offered and, thankfully, accepted the job!

The band was back on the road again with dates in the UK and an appearance at the Matarock festival in Barcelona followed by dates in The UK, The Netherlands, Germany & Belgium.

The year began with an appearance at Brofest (uk) #4 in Newcastle on February 21st and continued with more gigs across Europe.

August saw the re-release/repackaged ’35 Anniversary Edition’ of the ‘Set The Stage Alight’ album on Blood & Iron Records, which contains all the bands material from 1980/1 plus two live tracks from their appearance at The Headbangers-Open-Air Ball, Germany in 2005.The original 1980 line-up of Hynes, Summers, Downes & Bisland play on all tracks.

Former ‘Rogue Male’ bassist, Tony Forsythe, joins the band, making his debut with the band on Thursday 26th January at The Bomber Bar, Motala during a series of Swedish dates. In March they band return, yet again, to Scream Studios to record a cover of the Thin Lizzy’s ‘The Rocker’ and re-record ‘Set The Stage Alight’ 2017, with the new line up. During the coming months the band will begin work on a new album. Watch this space!

Another series of gigs in the England, Scotland and Belgium, Norway, including an appearance at Jam At The Farm – A Tribute to the late legendary record producer Chris Tsangarides. Writing begins on the new album. Meanwhile, in April, Pure Steel Records re-release Rising From The Ashes in CD & DDL format. Followed by a limited edition in Vinyl on September 28th. The album was launched a ‘Sell Out’ at the biggest little club in London, The Cavern Freehouse. On November 30th sees another Limited-Edition vinyl release. ‘Set The Stage Alight – The Anthology’ Featuring the original line-up of Hynes, Summers, Downes & Bisland’s 1980’s recordings. Between gigs the band entered Scream Studios to begin work on the new album, Ghosts of War.

Back into Scream Studios to finish the album. On the title track Ghosts Of War Danny felt there the Mid 8 needed an Irish female voice so asked his friend, former Thundermother vocalist, Clare Cunningham if she would do it. Clare was delighted to oblige and recorded her part in the USA where she is building a successful career. . Some more road work, including an appearance at Mearfest on Sunday 2nd June. With the album, produced by the band, completed it’s time to find someone to mix it. After a couple of false starts Tony suggests Pete Newdeck@ PN Productions who was thankfully available and did an amazing job! The single, Ghosts Of War, was digitally released on 29thAugust and the album will be released worldwide by Pure Steel Records and distributed by The Orchard/Sony on Friday 27th September.

Darren has decided to step down from Weapon to concentrate on other work. His replacement is a young Swedish drummer named Andreas Westerlund. A rockin’ welcome to Andreas!